I use Denizen Miniatures near-future range for colonial marines (because.. heck, they are the ones from the movie!) and Tin Soldier's Homophages for Aliens, both in 25mm (like the original Leading Edge miniatures). BTW, GZG makes a trio of "alien hunters" which look exceedingly good as predators...
Top

First pick your desired  scale, mines 32mm proportional. Prodos figures are the best, and will be around second hand for some time, these are near perfect. Infinity will give you colonists, also crooked dice, Firefly Gale force 9 is great for marshal  conversions. Colonists etc . Whilst mentioning GF- 9 there new Alien game is a must due next July /August and will feature some real quality plastic kit figures. Good hunting all, minis are a real joy in aliens.
Top

Apart from the the official Aliens Miniatures from Prodos AvP (31 mm plastic) or the Leading Edge Aliens Adventure Game (25 mm lead) there are plenty of options:

Copplestone Castings has a lot of military AND street types (28 mm metal) which are perfectly fit as Marines or corporate or private guys of different types.
https://www.copplestonecastings.co.uk/l ... t=1&page=1
https://www.copplestonecastings.co.uk/prod.php?prod=13
Various Imperial Guard minis from the big company may also be an option (28 mm metal and plastic) but I would rather go for the above from Copplestone because he
isn't a big bad corporation (wink-wink).

For Aliens one can use Genestealers from the SpaceHulk board game (28 mm plastic but quite big), or Helions from Nexus Battles (28 mm lead), or Aliens from Excalibur Miniaturen (28 mm lead) or Horror Click Aliens (31 mm plastic prepainted).
Top

Various Imperial Guard minis from the big company may also be an option (28 mm metal and plastic) [...]

For Aliens one can use Genestealers from the SpaceHulk board game (28 mm plastic but quite big), or Helions from Nexus Battles (28 mm lead), or Aliens from Excalibur Miniaturen (28 mm lead) or Horror Click Aliens (31 mm plastic prepainted).

GW's general humans are (in current runs) starting to close on 30mm, and will look out of scale with many 25mm figs. (The power armor figs are supposed to be 6-8' space marines...)

Hell, almost no major companies produce true-25mm scale figs anymore. Reaper is 28, GW has officially been 28mm for a decade.

A 28mm Sci-fi KS that may work for your gamimg Gruop.

If you like 15mm for more of a grand overview look Khurasan have a big range of vehicles and figures-lot more affordable but might not be everyone’s taste:
http://khurasanminiatures.tripod.com/adventure.html

I’ve been collecting and painting a load of alien universe at this scale for traveller/ hostile but will work well with Alien rpg - a great game btw!
Top

I found some aliens, face huggers and egg sacks on Etsy. Also on amazon I spent some bucks and picked up some Corvus Belli Infinity minis. They look good for marines and security forces.
Top

I've got a boat load of Prodos marines & aliens (plus a couple of predators...), so I got more than enough of those. I participated in their KS way back, and it was really difficult to get them deliver my pledge... but they did, eventually.

I have the miniature game rules box too, so I have the floorplan tiles which are fairly usable, although some graphics are a bit odd.

Floorplan wise, I also have the old GW Space Hulk tiles, and the Sulaco resin tiles from Fenris. Ideally, I'd need some special rooms and furniture maybe.

In minis, Colony 87 has some usable minis, although some of them are a bit 'grim dark' ie. 40k, but there's some mechanics there. Likewise, Heresy Miniatures does a set of 'inspectors' wearing uniforms/coveralls which should be easy to paint as space truckers etc. Statuesque Minis has a repair crew, mechanics in coveralls. They're bit borderline pulp/scifi but should work great.

I am looking into the possibility of printing some minis of my own, I Got a 3D printer from black friday offers. I expect the quality won't be anywhere near commercial, but we'll see. You can get both free and commercial STL files (for printing), anything from Sulaco/Nostromo craft, to M577 and Cheyenne Dropship, and neomorphs, characters in spacesuits etc. Not to mention all sorts of floor plan tiles etc. So there's quite a lot to go on.

It's hard to keep up with all the kickstarters going on, but I noticed Battlesystems has newish Core Space boardgame with minis and 3d cardboard terrain. Most of the humans look pretty interesting, the various aliens are less useful.
Top

Got these face huggers off of Etsy. 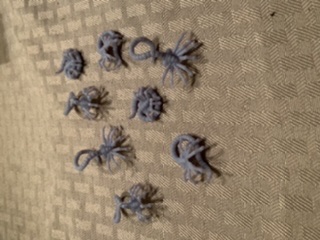 Those look useful Hadesblade, how big are they, hard to say from the pic?

I almost forgot, I've had for ages these great looking colonial marine proxies, they seem still available from Scotia Grendel. Kryomek range, and especially their Nexus marines. They're perhaps not up to modern standards (Prodos), but they have the right look, and good selection of weapons, flame-throwers, light weapons, smart guns etc.

Their aliens are very greebly, but unfortunately they are armed with various weapons, so not so useful.

Another one not to forget is Foundry (Wargames Foundry in full), and their Street Violence range with civilians, gangers, punks, road warriors, special forces, para-military etc. Require little or no modification.
Top
Post Reply

Users browsing this forum: No registered users and 8 guests
×