What do you thing about this concept of getting "PvP-Win-Points" for fulfilling your hidden agendas in Cinematic Gameplay?

Explaination: In the M&B interview Tomas told Matt (from about ~34:20 to 37:10), that the Cinematics will support Victorypoints for reaching personal agendas. This should support a tournament gamestyle, but is fully optional to use and not nessessary for the advance of the storyline.

For my part, I have nothing against this concept but wouldn´t use it. Tournamental gamestyle is completly uncommon where I come from. I heard that this is much more common in the US for games like D&D.

Hidden agendas are great, and I could thing of a situation, where I would look if the Wayland-Yutani Guys or the Spacetruckers on the run have aquired more goals to decide which result come up in the end.
Top

Actually, the term we'll use is not set, and I think we'll choose something different than "Victory Point" in the end, possibly "Plot Point" or something such. The idea is to reward players for following their agendas to create a cool story (that might even contain conflict between players), not to "win" the game.
Fria Ligan
Top

Could call them achievements or story points.
“Thanks for noticin' me.” - Eeyore
Top

The idea is to reward players for following their agendas to create a cool story (that might even contain conflict between players), not to "win" the game.


Thank you. RPGs are not conducive to "winning" and "losing". As CoC has taught us for almost 40 years, death does not mean you lost the game and not dying doesn't necessarily mean you win the game.

Now, the game of course needs dice points for having a ship's cat.

Bonus points for the cat being named Lucifer Sam or Halloween Jack.

Story points sounds better. Drama points would be an option, too.

There is no true cat name beside Jonesy! 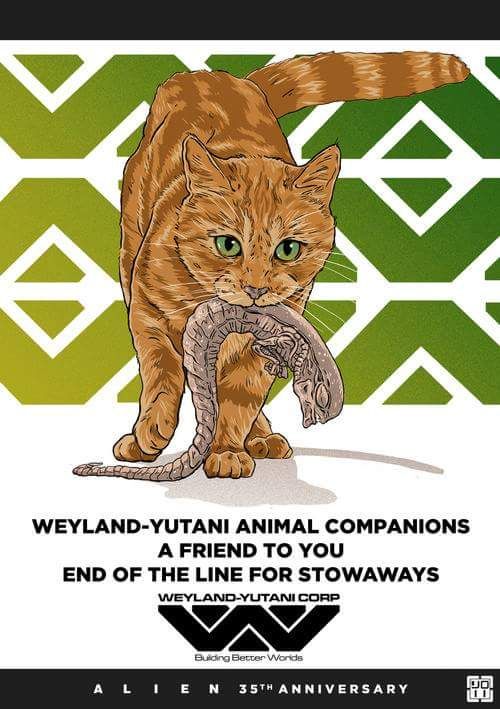 In a cinematic game, where there is a good chance that most or all the characters will die, I like victory points (or whatever they will be called) as a recognition that even if you die, you have succeeded in some way. That said, Call of Cthulhu has done just fine for decades without anything like Victory Points. But, they are by no means vital to play, and the suggested reward in the draft I have seen is simply that the player with most points gets first choice of character in the next game.

Co-host Dave and I are running taster sessions at UKGE, and, after the success of our Grindbone Tournament at Dragonmeet (and subsequently at gothcon) we are toying with some sort of way to turn the sessions into a sort of tournament, but not in the PVP way we did with Grindbone. Alien scenarios must remain co-operative, even if someone does turn out to be an Android.
Effekt - A fan podcast celebrating Swedish RPGs including, but not limited to: Alien; Coriolis; Forbidden Lands; Symbaroum; and Tales from the Loop. Featuring discussion magazine episodes and Actual Play recordings. https://effektpodcast.org/
Top

Victory points could be called "shares", as a reference to the first movie. If Brett and Parker are worried that the others get more shares, they better focus on their personal agendas.

Or just "bonus points", because both space truckers and colonists want a bonus. Even colonial marines if they're sponsored by a corporation and there are special objectives that give a cash bonus. Bonus point is a generic term. The only drawback is that the players may think that it gives a bonus to dice rolls, but otherwise I like it.
Top

I really like, that FL changes victorypoints for storypoints and gave them another mechanic: "Automatic successes" instead of Tournament Victory Condition.

Just need a cool idea to represent them. Thought about pokerchips or cards with the famous drinking bird on it.

Users browsing this forum: No registered users and 3 guests