How do you all go about creating new (and well-balanced) talents, specifically new Career Talents (non-combat focused)? I'm working on my hack and getting a little stuck on these. The ones I'm coming up with feel either too weak or too powerful...

Maybe you could post some of your talents to start off the discussion? Im not sure I understand exactly what it is you want help with. (cross posted on FB)
FL Name Generators (beta): first and last names, tavern names in swedish and english
Public Google Drive Folder with FL Resources (made by me)
Forbidden Lands Locations Reference
Top

Here's an example from the new Artisan profession I'm working on. 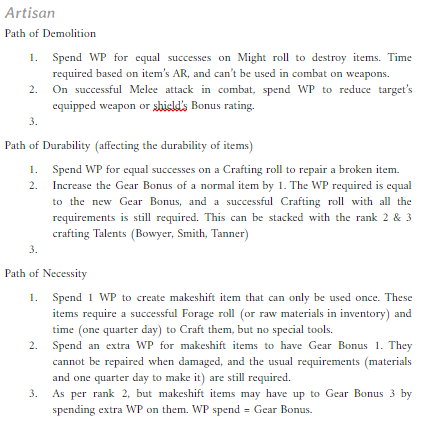 I like the idea for the artisian class. A second strengh class is needed imo.

For the development of the class talents i would make a different way.
I see a single talent path more like an archetyp in other roleplaying games. For the hunter, you can develop him to an archer, a beastmaster or an pathfinder. Also very clear is this in the cases of the druid and the spellbinder, which simply have access to their special spell schools.

The armorer path could function similar, with allowing to repair more effizient, to harden to prevent armor decrease and to give armor bonus.
The bowyer could modify range, prevent pushing decrease and buff  damage.

The class talents are an addition to the normal talents and would interact with them.
Top

That's an interesting idea, Arnold, but for my hack I don't want such a strong focus on combat for the non-combat classes. These are some great ideas, though, and gives me something to think about.

If you're interested, here all 8 of my "Careers" (Professions) from Nordsaga, and my current thinking with their Talents. You'll notice that only the Fighter has three combat talents, and I don't want to change this. New talents are all in green - it's quite a lot!
*Each of the Vitki's Paths contain 8 runes from the Elder Futhark, and all 8 can be cast once the Talent is chosen. Ranks in each Path determines how many WP can be used in each rune, as mastery of a Path equates to the ability to cast more powerful runes.
Top

Wow, cool stuff.
I like expizit the new rogue. The FBL rogue is to much assassin for me either.
Top

Thanks! I also wanted to remove talents tied to Advanced Combat, which I've more or less achieved now.
Top

I can second this, too.

I am looking for a new third fighter talent, too. But the fists talents remind me too much a monk from pathfinder/d&d, which doesn´t fit so well in the FBL setting.
I think i will develop somethink more in the direction of going berserk or commanding others.
Top

Someone has already developed a Leadership talent for that purpose. An Unarmed talent makes sense in my setting (the Vikings were proficient in an unarmed martial art called Glima), but I get your point.
Top

But the fists talents remind me too much a monk from pathfinder/d&d, which doesn´t fit so well in the FBL setting.

Why not? Unarmored combat has been part of every culture in the world so why not Ravenland?
FL Name Generators (beta): first and last names, tavern names in swedish and english
Public Google Drive Folder with FL Resources (made by me)
Forbidden Lands Locations Reference
Top
Post Reply