What have you created for Forbidden Lands?

Google has it, so you might also send a request to have it de-indexed from google and removed from the site map at perchance.org.

For those that havent seen it I have created a session generator for creating random adventure sites, NPCs and Terrain Encounters.  The thread for it can be found here - viewtopic.php?f=79&t=5021
Fbl Session Generator - https://perchance.org/fl-session-generator

So, I've made a few more maps. The first two are area maps, which my players found early in the campaign, before they saw the big, official, map that came with the game. One is a local area map of the Anger bay and the other one is a big map of Raven land, just not as detailed or accurate as the official one.
Angarsvik
Ravland

Then there's the elven outpost of Lake Stillness. An area of great importans to the elves. It's said that one of the last known Trees-of-guidance is found on a small island in the middle of the lake and elves have come here for thousands of years to meditate in the peaceful shadows under its canopy. Many of the elder amongst the elves have spent time here in search for guidance and a meaning to their long life. It's rumored that the first step of finding your way to the place beyond the stillmist is finding the way inside yourself and what place would be better suited to search for an answer than this, under the Tree-of-guidance? Unfortunately something foul has entered the woods and many of the younger elves have reported sightings of unnatural creatures close by.
Stillhetens sjö

Finally there's the Fountain of Flow. A natural fountain, allegedly fed directly from the godess Flow, of such size the river Meliwater (or whatever river suits your campaign) starts here. The fountain is considered sacred by most kin and many different religious factions have temple, shrines and sacred relics here. Legend has it that the first druids was led here by the Shardmaiden and they raised the first temple. Since then, many different kin and factions has arrived and the area has been built and expanded upon. Nowadays the area is a bustling little settlement with commodities like an inn and peddlers frequent the marketplace. But wherever there's a lot of people, a lot of gold and a lot power, schemes and intrigues are bound to follow. All of the different religious factions seems to get along just fine but most of them would rather see the fountain in their own hands and conspire to get the other ones out. Also, the orcs in the nearby mountains aspire to show the Raven lands they are as sophisticated, pious and capable of religious benevolence as other kin. They just realized it's much easier to take this settlement by force than finding another holy place and start building temples of their own...
Vanna Brunn
Top

Hey. I've been toying with a home brew setting and I've put together a 'test' page. I'd love to get some feedback.
Currently the main artwork is placeholder from a thousand nights and a night (Which has no usage restrictions.). the rest isn't. 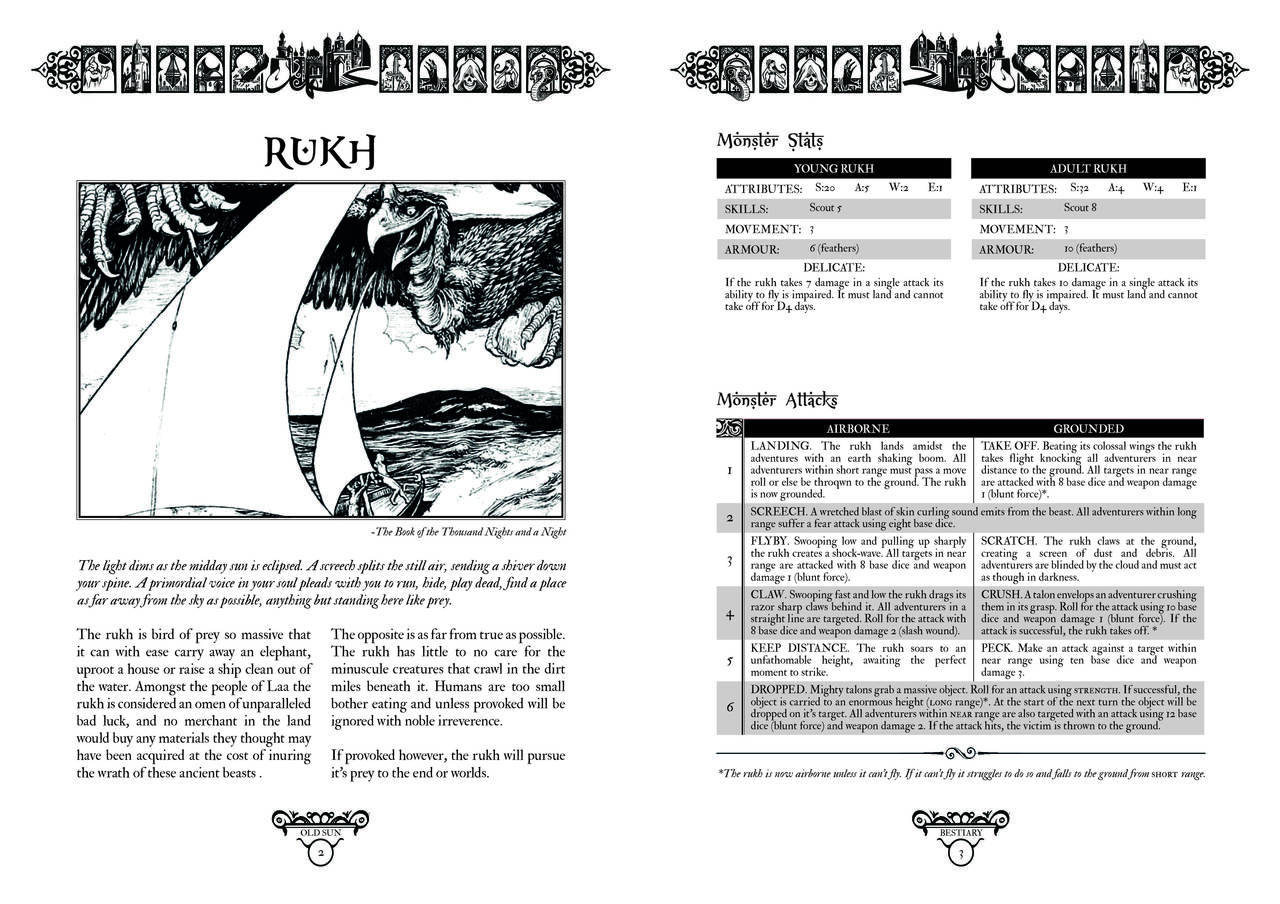 Thank you for sharing this!!!
Top

I'm using simpler rules to speed up combat (felt there were way too many rolls : roll for attack, roll for push, opponent roll dodge/parry, armor).

No action economy
Describe what you want to do on your turn, the GM will tell you what’s possible or what might take more than a turn. Rule of thumb is your character should do something interesting in their turn, which usually results in a dice roll.


For example, if your character needs to find a rope and a grappling hook in his pack, tie them together, then run to the next room to try to throw it on the other side of the chasm, that’s fine. Way more fun than being told he can only take the rope and tie it together, then next turn he’d have to run to the next room and then two turns later only can he try to throw it.


Simpler actions
Without action economy, you don’t need to track and mechanize every single possible action a character can do in a turn. The character just describe what he wants to do, the GM determines which check it requires (if any) then narrate the result.


Dodge/Parry
Since there are no action economy, when declaring a Dodge or a Parry, the character will need to spend 1 Willpower or suffer 1 Agility damage (his choice) to be able to roll.


The GM don’t roll for the NPCs Dodge or Parry. Instead, they automatically gain 1 success for each WP they spend.


I also personally don’t use the special modifiers to Parry and Dodge from types of attacks.


Furthermore, armor and weapon degradation isn’t tracked for NPC.
If a PC is trying to break an NPC’s gear, adjust a Might roll with the above modifier for armor or equal to the weapon’s bonus as a negative modifier.
Top

i tried my hand at homebrewing some mood conditions.
i made it quickly and im still uncertain on fria ligan systems so if anyone finds any glaring balancing problems or what not, shoot it to me. i would love feedback. distributing these status effects is really up to you. you can stick them in a crit injury table, or pass them out as narrative devices. some of the descriptions are references to my own game; feel free to make your own!

about the depression status: it's a very serious condition in the sense that it is extremely debilitating, but it doesn't kill you, so it's great as mechanical support for narrative devices.

as a sidenote: i'm surprised i haven't seen more homebrew for forbidden lands!!! even proportional to its relatively small population of players.

So, I updated my players map with a winter theme. Svartstena in winter.
Cheers!
Top
Post Reply
Who is online In total there are 8 users online :: 0 registered, 0 hidden and 8 guests
Users browsing this forum: No registered users and 8 guests based on users active over the past 5 minutes
GZIP: Off
×