Hi all - I'm not even convinced the default skill list is not "fine" - but I was tweaking a few things and wanted to share and hear thoughts.

Background:
I have summarised my changes in this picture. Items in Green are new and items in Blue have been moved.

What do you think? I'm not out to change anything drastically but to spread a few things and see how it feels. 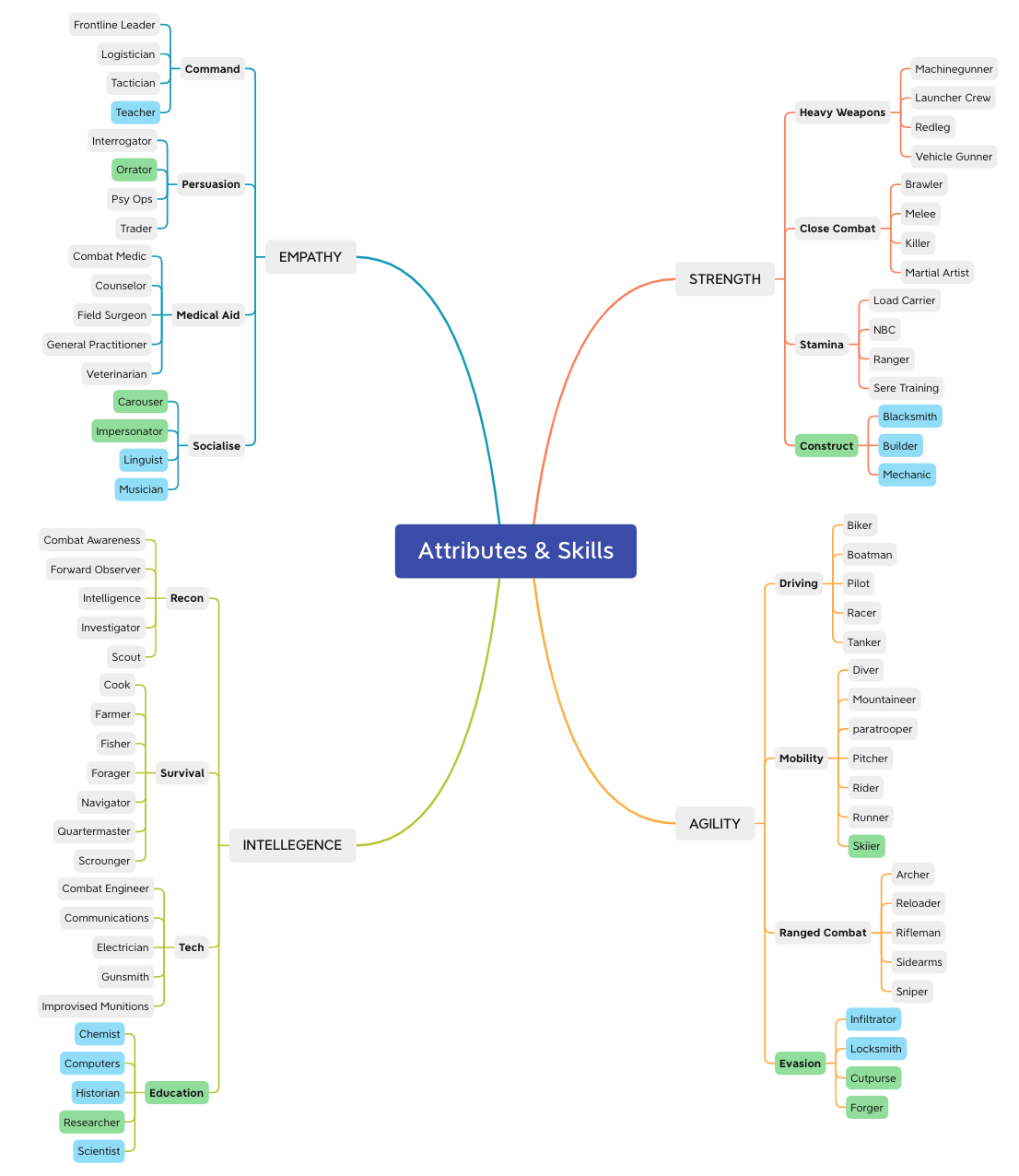 I came up with a similar chart of four skills per attribute, but have not yet filled in specializations. Skills might be modified as follows:
I like the idea of the original post, but I do not think that a STR-based skill "Construct" would be a good fit in such an abstract system. Most of the time, construction work, blacksmithing and mechanical work is and should not be STR-based. People are good in these trades, if and when they know what they are doing. Knowledge trumps muscle mass and experience.
liber & infractus
Top

Aw damn, I thought we were gonna get a lot of meth-related skills!

The problem that you run into always with this sort of thing with trying to keep the skills balanced out to their parent attributes is that a lot of it just makes no sense. There's already been debate about Medical Aid under Empathy, for instance. I'm relatively okay with that. But now all the stuff you've added under Evasion I'd argue could much more so belong under Intelligence.

Good point that Heavy Weapons, practically speaking, is actual AGL or INT and very rarely STR except for launchers I guess as written - hence I am leaning toward “trying to balance” as not even a good goal as suggested here and in earlier posts too.

My thinking around Construct (and yes, it doesn’t exactly feel right to me either) is to split some of the heavier tech things from tech. I agree that INT etc could very well be governing for the trade skills but some of these things might need physical strength to do well (e.g. blacksmithing) and hence I kind of forced it there. The idea also was to split base building is to pull all the STAMINA tests (builder) to an actual skill to do with building - Construct. I’m not sold on it though - which means I could easily shift it back into Tech and put builder back under Stamina.

On the armed combat / unarmed split - I do like the idea, especially because I wanted to include some extra specialities like Wrestler (bonus for grappling and perhaps disarms), Fencing (maybe a special rule around blocking, e.g. a free block), and potentially separate weapon types into different specialities without making it too complicated (which I doubt is worth it).

SOCIALISE I wanted to split “getting people to do stuff for you” from “hanging out and getting rumours / fitting in” - mostly because I’m an old-school WFRP player and I like the Gossip skill. Plus this them would play into the Rumour system nicely and would make a player who specialises in this area feel pretty good and useful.
Top
Post Reply