What are machineguns? The game knows but refuses to admit it.

What are machineguns? The game knows but refuses to admit it.

There is much confusion through the rules about what skill is actually used a couple of types of weapons. The big ones I see are machineguns and grenades. Each of these is mentioned as falling under Heavy Weapons at times, Ranged Weapons at other times. The Gunner archetype is confused with the combat rules and the combat rules are confused with the skills list. (I insist that grenades should fall under Mobility, since using them is actually primarily athletics. That's another story.)

Machineguns are fundamentally the same as most guns. Sure, there's some extra stuff in there, barrel changes, etc. Especially if you're talking about HMGs that must be assembled from 2-3 parts to use. But that still would not make them Heavy Weapons, and the game is very clear about why: it applies a blanket rule that firing heavy weapons at targets smaller than vehicles gets a -2 penalty!

I'm sure this will get cleared up, but that right there is the definitive logic if you ask me.
Top

MGs are hard to model under any combat rules system, and is particularly hard in a low ammo environment.

Machineguns cover a range of roles from squad automatic like the SAW all the way up to 14.5mm anti material weapons.

Doctrine also means that they are rarely fired at a single target, instead they create a beaten zone or a line of fire that is nearly impossible to cross without being hit. And they are the kings of suppression.

So how (or why) would you use an MG when ammo is short?

Barrel changes only come into play if the MG is being use for sustained fire.

This of course also brings up the matter of engaging multiple targets in the one round. Ammo dice perform this task but miss with the Ranged Combat die roll and everything misses.
Last edited by AEB on Tue 15 Dec 2020, 02:05, edited 2 times in total.
Top

Machine guns (note, two words is the correct spelling: sometimes the Legion spells it right, sometimes they don't) should target hexes in the same way as other heavy weapons. They are not used to target individual troops, they are used to target masses of them. The only thing missing in the rules determining exactly which character in the group is hit.
Top

"The machine gun is an area weapon." These were the first words in the body of the lesson plan back when I taught a thing called Theory of Machine Gun Fire.

Perhaps this shouldn't apply to LMGs but certainly GPMG and HMG. In fact, the beaten zone of a machine gun will typically cover more than one hex. Machine guns are kind of their own thing.

But the gameworld is a fictional world and it has to correspond roughly with the way players expect things to work ... so if you give a machine gun a 3-hex beaten zone and make enfilading fire a thing then you will be struggling with the problem of players who have never sat through an exciting 40 minutes of Theory of Machine Gun Fire, don't know how to employ machine guns to best effect, and think your rules are just weird and stupid. Those people will then post long and bitter rants on Facebook encouraging everyone to demand a refund.

So for game purposes, they might be best covered by Ranged Combat. Though I would prefer Heavy Weapons and dispense with the negative DM for small targets. But not as their own separate thing.
Top

It is an interesting problem from a game play perspective.

Perhaps machineguns need two modes - burst fire used against a single target like any other ranged weapon, or a sustained fire mode that engages a Hex and potentially everyone inside that Hex like a heavy weapon.

Sustained fire mode would require a bipod, tripod or pintle mount, would use the maximum amount of ammunition, and require a crew of at least a gunner and loader.
Top

Machine guns are kind of their own thing, but they are not a completely foreign thing. Shotguns are their own thing. Bolt-action precision rifles are their own thing. Entirely different operating philosophies apply to using them effectively. And yet they are both bullet-spitting weapons, and we happily lump them together under a Ranged Combat weapons without a thought. (but with specialties, sure, good.)

An MG has a lot more in common with a rifle than it does with a TOW launcher. You line up the sights, flip off the safety, and pull the trigger. Maybe the gunner specialty could offer a talent that allows for raked fire or something, that would be cool... I've already mentioned that I'd rather see more specialties offer unique feats that only those characters can do than just "here's another specific +1"... but if that's not at least as effective as just using ammo dice with the +1, then why bother?

Really, I'd be happy with any ruling that was consistent, complete, and airtight. Right now the path to doing that seems a lot easier with Ranged Combat than with Heavy Weapons.
Top

As is, machine guns are area effect weapons because they are heavy weapons. They attack vehicles and hexes (aka, big things). The only missing piece right now is determining which character in the hex takes the hit(s) and which are just suppressed.

Shotguns and "boltguns" are fundamentally different. Like other examples in Ranged Weapons, they are designed to target an individual, not an area.

The game does know what machine guns are, it just needs that one more piece to make it work right.
Top

Sorry, but that's just incorrect. Since they lack a Blast rating, MGs cannot attack hexes. They must attack a target. You COULD attack vehicles with your SAW or RPK, but I think you're inventing a pretty faulty doctrine here. And there's certainly nothing inherent in the design of a machinegun that would prohibit targeting an individual. It is of course done exactly the same as other guns. So this argument does not fully hold water -- but I am fine in principle with there some sort of additional definition that gives significant "look what I can do" capability to MGs. They are important weapons for a reason.

However, if you interpret the rules as written, you have to give a -2 to any MG firing at a human target. That is ridiculous and it's clear there's no way that was the intent.

So if what you say is the way it's intended to work, there's at least a very large piece missing, probably more than a few!
Top

No blast = no hex isn't in the rules.


TARGETING: Heavy weapons are generally used against large targets such as vehicles or an entire hex on the battle map. You get no bonus for firing at large targets. Instead, you suffer a –2 penalty if you fire a heavy weapon at an individual.

Machine guns, in the military definition, don't normally have a semi-auto or single shot setting. (An exception is the M2, which could have a "sniper rifle" mode.) You will always shot multiple rounds per attack and these will throw off your aim against a point target the size of a person. The interaction of the heavy weapons rules with machine guns are good, they just need one more step.
Top

In the context of a game where scarcity of ammo (and other resources) is a central component, different usage is needed. Full auto area fire would be an exception, not the rule. Something to be used in an emergency.

The pros of a mg of any kind is the stability (thanks to weight and bipod/tripod) coupled with the ability to shoot large volume of fire (thanks to belt feed & barrels that can be changed). Cons are of course weight and bulk and that they often need more than one crew to work optimally.

Carlos Hathcock firing singles shot at 2500 yards at a single person in Vietnam 1967: 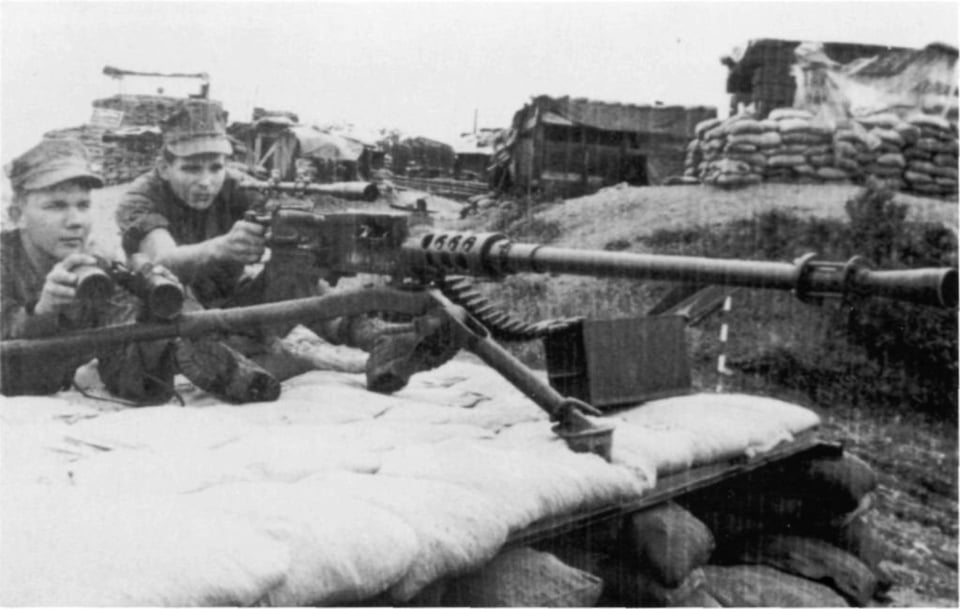