We've been playing with Lego figures and vehicles recently. It makes tank battles kind of impractical but it's nice for ambushes and traffic stops, run-ins in the woods when you're trying to skirt around a town.
Top

While they are expensive the newer models (there are still some older kits that mixed resin with white metal) allow you to build different variants of the same base vehicle ( the M113 can be M113, ACAV, M106, M163 VADS or M901 ITV for example) and you get addition parts that can be used to customise other vehicles.

You're looking at around 8 USD a vehicle, and you need to assemble and paint.

They also have infantry that aren't the greatest on detail but at the scale are adequate plus they include heavy weapons.

Long time ago I use to play a game called Tractics using 1:72 scale vehicles and soldiers. You can do terrain really cheaply - I design a building on Sketchup, print on A4, glue onto old carboard, cut and assemble and you have a workable building for 50 cents. Get a large piece of green material (tablecloths are good), and use newspaper under the cloth to form terrain. Any old material can be cut up to make roads or waterways. Rather than use premade trees buy a big bag of dyed moss and collect sticks to make trees.

Works fine and as a Twilight battle isn't going to involve huge numbers of vehicles you can do it for maybe a few hundred dollars at most. Then use rulers or tape measures for movement and range converted to scale.

In Australia you can buy a large folding table from Bunnings for $35 dollars. Put two together and you have a big enough area for a battle.

For most purposes battlemaps and counters are fine, but if you want to do something special there are options.
Top

As anything above micro armor is way too big for the 1hex=10m=2cm on the board scale, these are the best solution I found.
https://www.shop.scotiagrendel.com/inde ... 4_225_4_23
The casting is decent and you have a wide selection to play with. I also 3D printed some vehicles in the same 1:300 scale, however the selection of STL files is somewhat more limiting for specific military vehicles and especially figures as historical and specifically cold war isn't that big in the 3D print community. And some models might not print well on such a small scale, most of these I downscaled from 1:100 models and it shows, small details tend to flake off.
For figures I have 1:72 infantry and 3D printed mix of ~1:72 people and "make it fit on a hex" scale animals.
For Cold War 1:72 figures see http://www.plasticsoldierreview.com/Per ... ?period=46 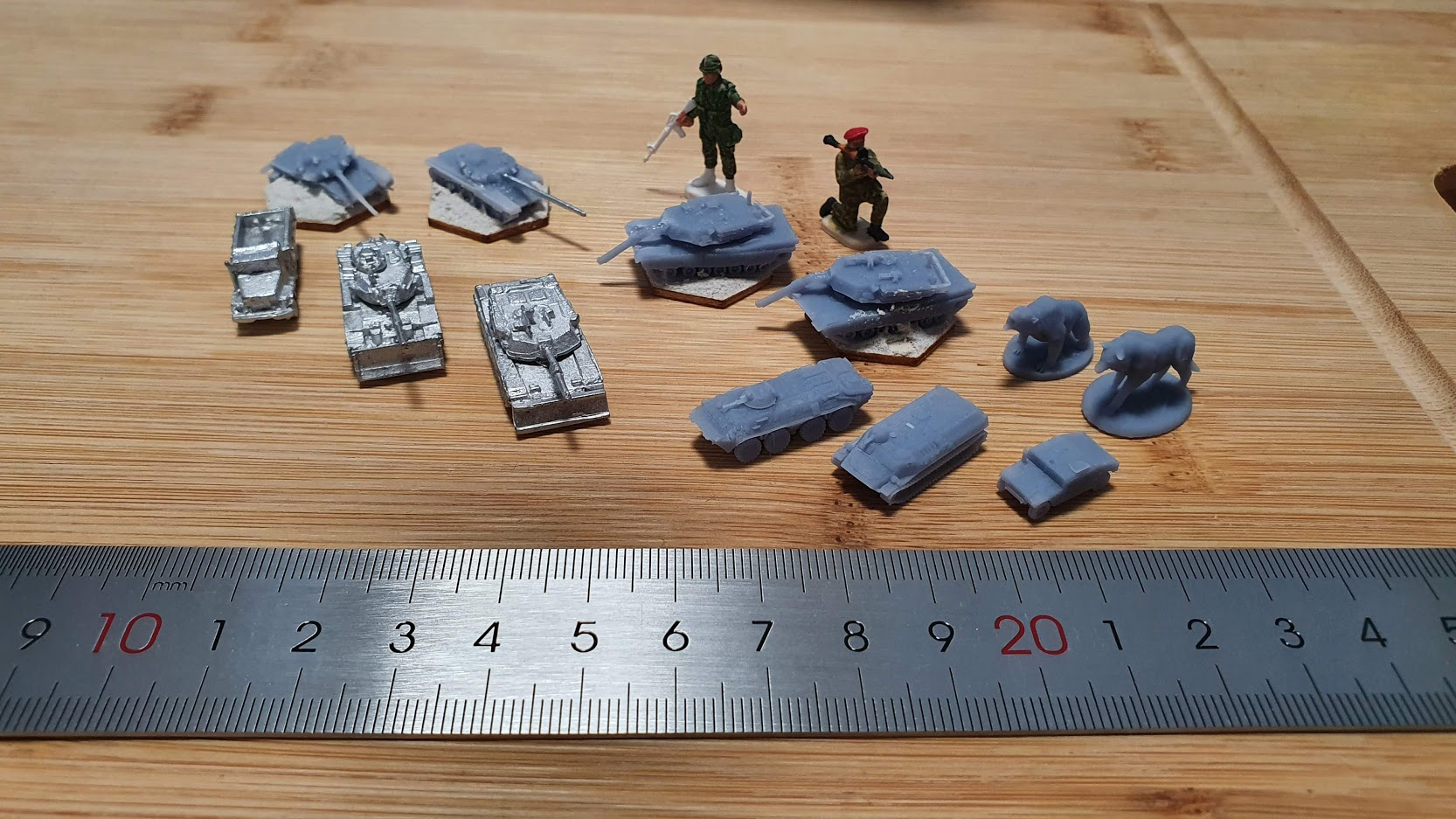 
There's a newer competitor, Battlegroup NORTHAG, in 10mm scale. Their selection is still pretty limited, but it's another option and should be cheaper as well. Of course, it puts more emphasis on the vehicles and less on characters... and with any of these scales I suspect you have some trouble fitting vehicles into hexes at normal scales, if you aim to use those.
Top

Team Yankee has LAV-75s. That is all.

Miniatures are a luxury anyway - for most people counters on a hex map will serve just fine - and given the current global situation a lot of people will be playing via VTTs anyway.

For a few of us who are modelers and like painting and have the room using a more old-school sandtable is also doable (I already paint miniatures for D&D).

I doubt you will find miniatures small enough to fit into a battlemap hex, particularly as their may be multiple Characters or NPCs or vehicles inside a 10 meter hex.

Currently I am waiting on whether my players (we are lucky here in Australia regarding the pandemic atm) want traditional TW2000 or a WW2 variant before I buy miniatures anyway.

But it is nice to drool over pictures of miniatures.
Top

Some wrecked terrain elements whipped up from (semi) failed 3D prints at 1/300 scale on top of 20mm hexes. If it's enough to get someone to dip their toes into scale modelling, I'm glad. 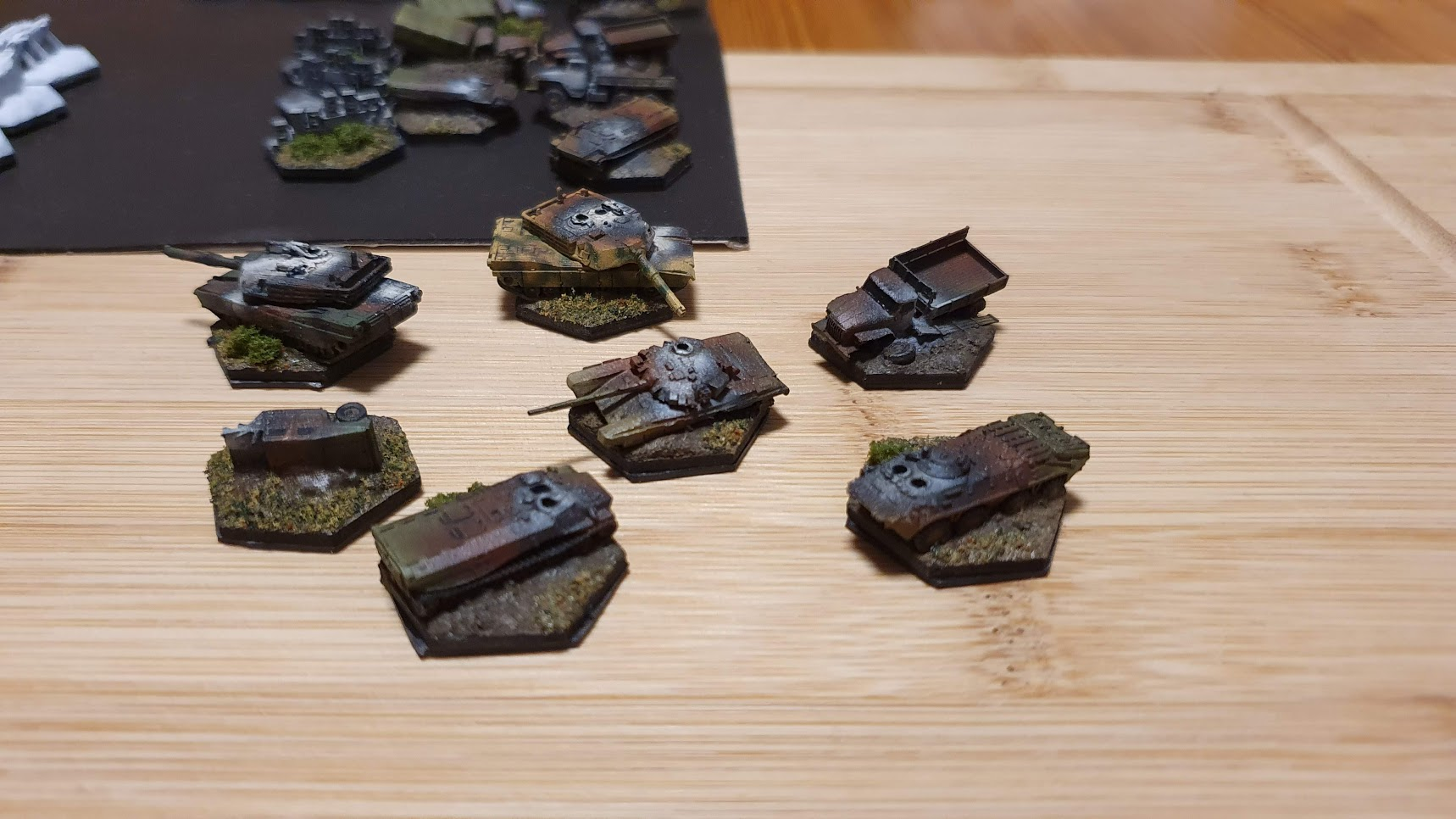 I love miniature building authorities 28mm vehicles and have always wanted an excuse to buy one. But based on the scale of the hexes. I’d either use my team yankee minutatures Or the micro armor stuff I picked up a while ago
Top
Post Reply