From my limited memories of my college statistics class, I understand how the second column is calculated for base success.

However, for the life of me I cannot figure out how the third column is being calculated.

Can someone enlighten me on the formula being used? I just cannot figure out how Free League are getting those numbers.

(Example of table below.) 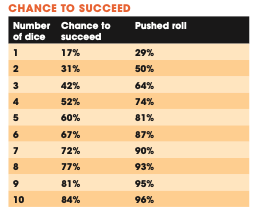 
Can someone enlighten me on the formula being used? I just cannot figure out how Free League are getting those numbers.


As said in the articles, it is easier to calculate the probability of failure, and subtract from 1 to know the one for success.
It is the case here as a "success" is validated if you have 1 or several 6 rolled, and this probability is hard to calculate.
If we make a calculation for 2 dice for example (as it gets complicated real quick) :

But that's not entirely true as you don't re roll 1 on the Attribute Dice (AD).
then you have to count all the combinations, hopefully with a computer :

And if you rolled 2 AD : the same than before
+ the case where you rolled twice 1, and then you have 1 failure out of 1 occurence (you don't re roll)

Hence the 50% to succeed a 2 dice roll with the possibility to push.
Top
Post Reply

Users browsing this forum: No registered users and 1 guest
×