I'm curious if there has been any word about a Symbaroum Starter Box Set? I'd be very interested in one, should it be created.
- Jon Hook
Game Designer & Podcaster
Top

I'm always on the fence regarding Starter Boxed Sets: first of all, because I'm usually only interested in Starter Sets from the games I already play. So, everything regarding lighter rules-version, pregen characters, summarized explaining of the world, etc are of no real use to me. It's just the little extras (custom dice, maps, tokens,...) that catch my eye.

That said, I think a Symbaroum Starter Box could be of interest for Fria Ligan once their 5e adaptation is fully developed. The Starter Box could then contain both rules set, those for 5e that just want to give a try to this new setting, and the original Symbaroum ones. This way, 5e players and GMs could take a look at the Symbaroum rules, see that they are not hard or so different from what they know, and could give it a try. I think, in that regard, the Starter Set's commercial objective should be more aimed at porting players and GMs from D&D to Symbaroum, than to introduce new people to Symbaroum directly.
Top

It's in the works but I can't remember any ETA. Maybe this winter? Mattias Johnsson Haake talked about it in their latest podcast. I think it's to be called Symbaroum - Treasures of Davokar or something like that. Maybe Ruins of Davokar? I hope it will give new GMs/players some insight into the depths of Symbaroum and not just focus on the treasure hunting/dungeon-delving aspect of the game. To be honest, that's my least favorite part of the game.
Proofreader Extraordinaire
Top

"We will run a pre-purchase campaign later this year, and alpha PDFs will follow soon there after. Delivery to pre-purchasers is probably early next year, after which the boxes should hit the shelves in late Q1 2021."

And also:
"...this is for original Symba, and mainly meant for newcomers. You who are already playing the game will not find much you haven't seen before = two [new] adventure locations (+A3 maps), the new stat block design (similar to the monster cards) and the "Corrupted Nature Dice Set"."

Let me repeat one thing, just in case you missed it... "¡¡¡CORRUPTED NATURE DICE SET!!!"
Top

The Starter Set has been announced and shown, and pre-orders are open.

PDFs are sent shortly after pre-ordering! 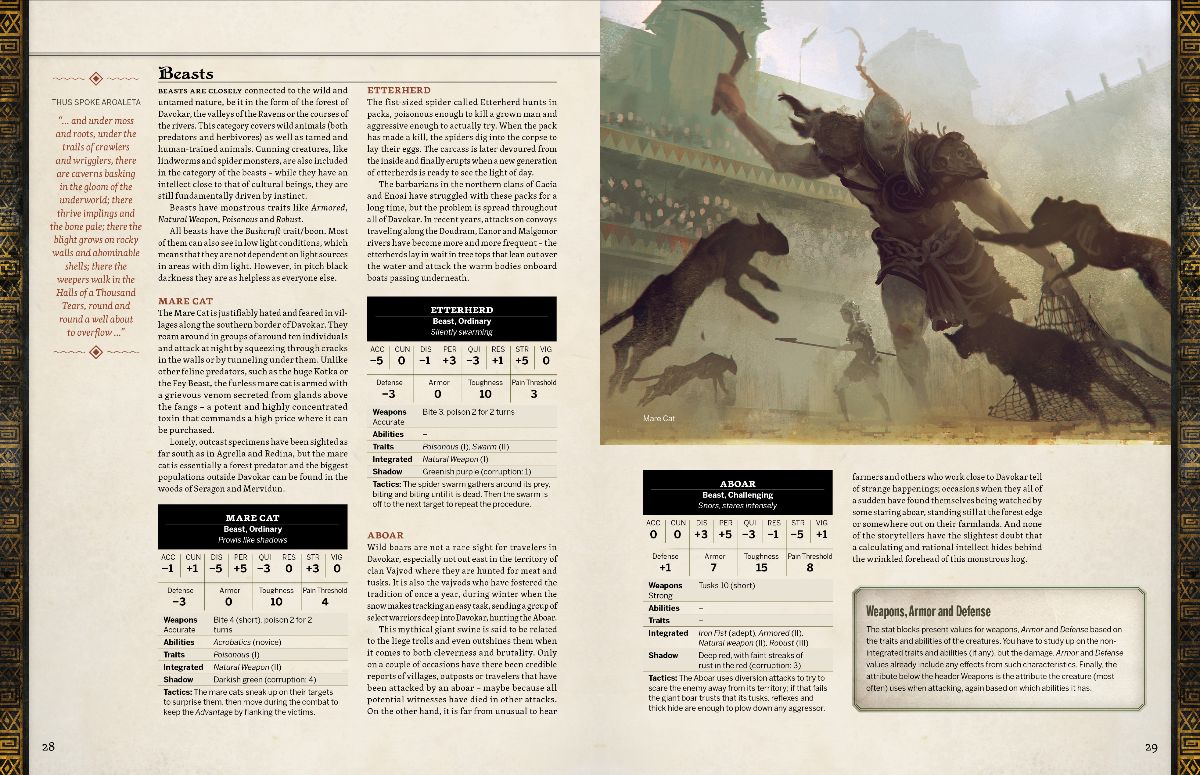 The new Stat Block, from a promo email.

Like it better than the old one (quicker to look at), but still missing all the info needed to run an enemy at the table. For every enemy, the DM still has to look at the various books for the Active Abilities.
It looks like those Abilities or Traits that include Active actions are written in italic. A step forward, but without one of the unofficial apps, still cumbersome.

In several D&D5e games I've seen (I don't play D&D, but have seen its stat blocks), every enemy has a description of how its special abilities work. Stat Blocks are longer, of course, but much more useful for the DM. In fact, the stat blocks found in Ruins of Symbaroum conversion to 5e have exactly that.
Top

For comparison, the Stat Block of a Jakaar from Ruins of Symbaroum, with everything needed to run the enemy straight to the table.

Looks like a great intro set for those new to the game, but as an old hand, $40 for two adventure locations and some dice is a bit steep. Hopefully the adventure book/pdf will be available separately at some point.
Top

I have to add, after watching an interview to Mattias about the Starter Set, that he pointed out the new Stat Blocks do a split of Abilities between those Integrated and those you have to look for Active actions.

So, it's great and I like the new layout. Congrats on that!
Top

Looks like a great intro set for those new to the game, but as an old hand, $40 for two adventure locations and some dice is a bit steep. Hopefully the adventure book/pdf will be available separately at some point.

Same situation here. In an interview, Mattias confirmed that the PDFs will be available at Drivethru once the physical boxes have been sent to the pre-ordered.
Top
Post Reply

Users browsing this forum: No registered users and 1 guest
×