Lubau - the abberant first planet of Kua system. Day length - 27 hours, sidereal year - 91 days, axial tilt 43 degrees and one side always facing the sun. I'm not an expert, but does this configuration make any sense, astronomically speaking? Even a little bit? I mean, if one side of the planet is always nightside, it should have axial tilt close to 0 degrees and day should have the same length as sidereal year. Or am I missing something? I know, perhaps it's an overkill and nitpicking, but I have hard time suspending my disbelief in this case.
Top

*spoiler* It might be a reason for this very unsusual axis and tilt. Perhaps something is causing this...

Its is explained to the GM in some adventures that deal with Lubau.
Top

Well, I get it that unusual axial tilt is caused by sth that will be/is explained in some adventures. (BTW, can you tell which adventures?) I don't have a problem with the axis per se, but the combination with other assumptions like one side always facing a sun and difference beetween time of planet rotation and its orbital period, makes it hard to believe or even impossible to exist.  AFAIK prerequisites for planet to have one side always facing a sun are the prerequisites that I mentioned in first post. 43 degrees tilt should have impact only on seasons on Lubau (their severity).
I can think about one possibility where planet with such axis would have one side always facing  a sun - it's when this planet wouldn't move around the star, what is just illogical and in this situation there wouldn't be such thing as sidereal, so this is not the case.
I was planning to guide my players to visit Lubau, but as GM I  just will probably have to improvise and just abandon one or two characteristics of that planet. I just can't explain them something that I think it's impossible (even magical worlds have their own logic). Could you give me any spoiler about the cause of this whole situation, so I won't have to take the whole thing back when I'll eventually buy adventures that you mention?
Top

So this is mostly out of my memory... take it with a large grain of salt.

So its comes from a adventure suite in swedish. I don't think it has been translated or is even in print in swedish.
It is one of these mysteries of the third horizon that has been put in there to allow adventures and GMs to weave a colorful story.

But the premise in these adventures is the most of the Lubau planet is actually a created artifact mostly a giant machine. And hidden in the deep waters of the oasis is a powerful ancient ship that acts as a key to access the machinery of Lubau. The ship and the planet is tied together and when out of a chance encounter and adventures the ship is activiated large events around the third horizon starts to unfold. Many conflicts between the factions comes to the fore when they all struggle to expain what is happening and getting control of the ship / planet.

If I remember the ship and basically with the planetmachine as a powersource generate its own portalfields and exist in many different places all at once being multidimensional etc etc.
Simply put - that ship will be the new superweapon of the third horizon and who will end up control it if anyone can or should.
Top

Wow, I got my mind blown. I hope that adventure suite will be printed in english, cause the premise sounds promising.
Thank you for explanation. It sheds light on situation, and at least I know what I can afford with storytelling.
Top

Thoses hints are very intriguing, thanks.

However.. it is not possible for any object (artificial or natural) to rotate around itself at a certain rate AND rotate around another object at a different rate AND for the first thing to show the same face to the second thing all the time. The rotation periods have to be the same, otherwise the "always the same face" idea does not work. 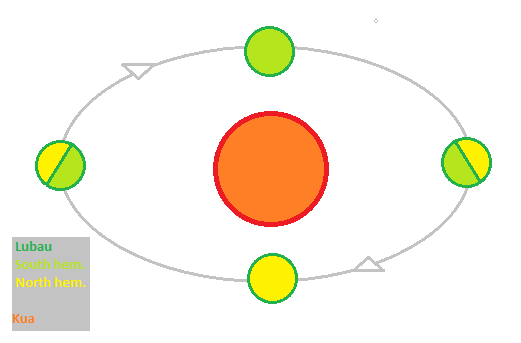 This doesn't work. It shows that axial tilt of Lubau changes from 43 degrees to -43  in half a year (which is 91 years long) - in reality object like planets can change its axial tilt but it takes hundreds of thousands to millions of years. It would cause probably catastrophic changes for any inhabitants. But let's assume that this isn't the case, and somehow this fast change of tilt dosn't have much impact on atmosphere, climate, etc. - for example the odd magnetosphere of planet protect its inhabitants from these effects. Still if Lubau axis rotation is 27 hours and sidereal year is 91 days both sides of planet would have day and night, because of the principle of physics that Peter quoted.
Top

I can't find a qoute in the book wich says that Lubau have no day/night change, only about seasons (at p.282 in the corebook).
Top

Same page, one sentence before the mention about no seasons:


"The very first thing the starfarers noticed when they arrived at Lubau was that
the axial tilt of the planet was 43 degrees and that the same side was always facing the sun."

and in second column:


"Farthest to the north, where the sun never shines, there are massive glaciers"

Users browsing this forum: No registered users and 4 guests
×