Homemade (in paint) research base

Homemade (in paint) research base

I made a map for my homebrew campaign today and thought I should share it... even though it is kinda shite. As a community, we thrive on play aid content!

Context: This map was made for a experimental physics/solar power research station located on the dark side of a sun-locked Mercury analogue metal planet. It is a W-Y facility, working to develope new solar power harvesting and storage tech to challenge the ISCS high-end power cell monopoly. The facility has an accompanying space station hovering in orbit to collect and redirect power and sunlight (protected in the shadow of a giant shield dish -- think something like the ship in the Sunshine movie). Of course, there is more to the facility than that, and in reality it is a top-secret experimental military grade laser cannon developing and testing site; so far, they have not been able to work around the ENORMOUS power output of firing the weapon (you basically have to have it stationed right by a sun for it to have any kind of operational use), but it is all rather exiting -- the laser cannon dish thingy, which is oddly constructed and looks a bit like a rearing cobra in profil, is called Uraeus, after the fire-spitting cobra head-dress that protects the forehead of Egyptian pharaos. So yeah, it is that kind of place... Here's the map. 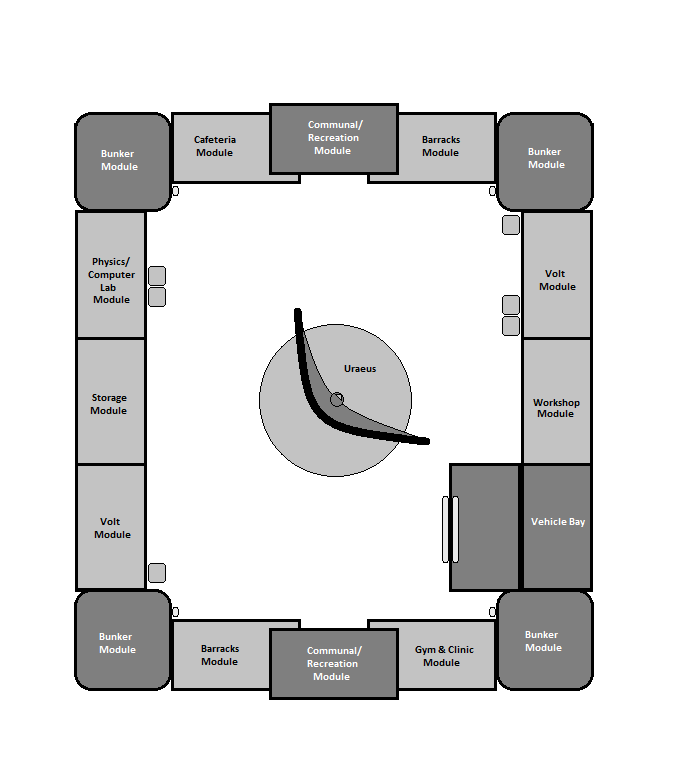 
The base is constructed by a series of pre-fact "container" buildings, with "panic room"/bugout-bunkers in the corners (these can withstand strong radiation and nuclear strikes). Darker section indicates a 2nd story level; the Communal/Recreational moduls are placed over a gap in the ground-level construction, making a sort of gateway into the courtyard; the dimentions are 22m x 10m (and probabloy around 6m high); the vehicle garage is basically 4 modules stacked next-to & on top-of one another, and hollowed out into a grand hangar/hall.

Enjoy
"And the rain sets in,
it's the Angelman.
I'm deranged".
--David Bowie, I'm Deranged
Top

Re: Homemade (in paint) research base

Great! Would it be located inside a crater? And how about the spaceport pad etc?
Top

Re: Homemade (in paint) research base

Great! Would it be located inside a crater? And how about the spaceport pad etc?

I didn't put it inside a crater since the planet was land-locked ("sun-locked") and the entire dark/back side lies in constant darkness, so there's no particular reason to sit in a crater (that I can identify, at least). I also ruled that the surface was pretty flat, and that you can land a dropship there pretty easily.

As for scale, a dropship is about the length of a standard bunker, while a M577 APC is about as long as a bunker is wide.
"And the rain sets in,
it's the Angelman.
I'm deranged".
--David Bowie, I'm Deranged
Top
Post Reply

Users browsing this forum: No registered users and 4 guests
×